The Rotary Club of Boronia is committed to raising funds for the 2013 to 2014 year for Australian Rotary Health.

In partnership with Rotary Clubs, funds are paid through “Funding Partners” to research health areas such as “Multiple Sclerosis, Bowel Cancer, Motor Nurone Disease, methods of preserving organs for transplant and Rheumatoid Arthritis.

Become a “Friend of Australian Rotary Health” by donating $100 or more……..

In March 2009 Gonny Rundell, one of our Club Members decided to raise $65,000 for Australian Rotary Heath Research and ride around Australia. 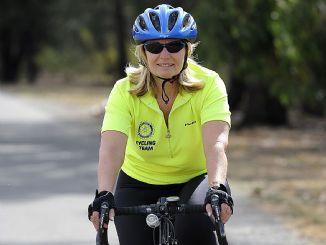 Gonny Rundell said she just knew she had to do it, when she first heard about the Great Australian Bike Ride,
So she rode her bike 18,000ks around Australia. Her husband John rode 10,000km with her and provided support along the way.

Gonny is also passionate about raising awareness of Mental Illness in Australia. The riders spoke about mental illness at functions during the ride, and took donations for Australian Rotary Health.

Gonny cycled an average of 103km each day, six days a week on the ride, and was one of only three riders that circumnavigated the whole of Australia.

She has been cycling for eight years, and currently does three gym classes and weight training and she cycles 200km each week.