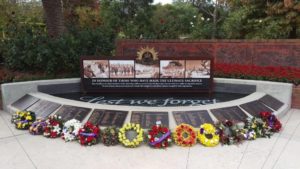 Guest Speaker was Dr Rosalie Triolo, History Professor from Monash University, who spoke on the contributions of Victorian teachers during the First World War 1.  A particular focus of Dr Triolo’s address to the students was the number of female teachers who volunteered to go to war and the jobs they undertook as part of the broader war effort.

As in previous years, music was provided by the St Joseph’s College Stage Band and the St Joseph’s Primary School Choir provided choral support; the Club thanks them for their valuable contribution.  Thanks also to Knox City Council’s Arboretum staff, Lightwavez Design and the Country Women’s Association – Boronia for their support.